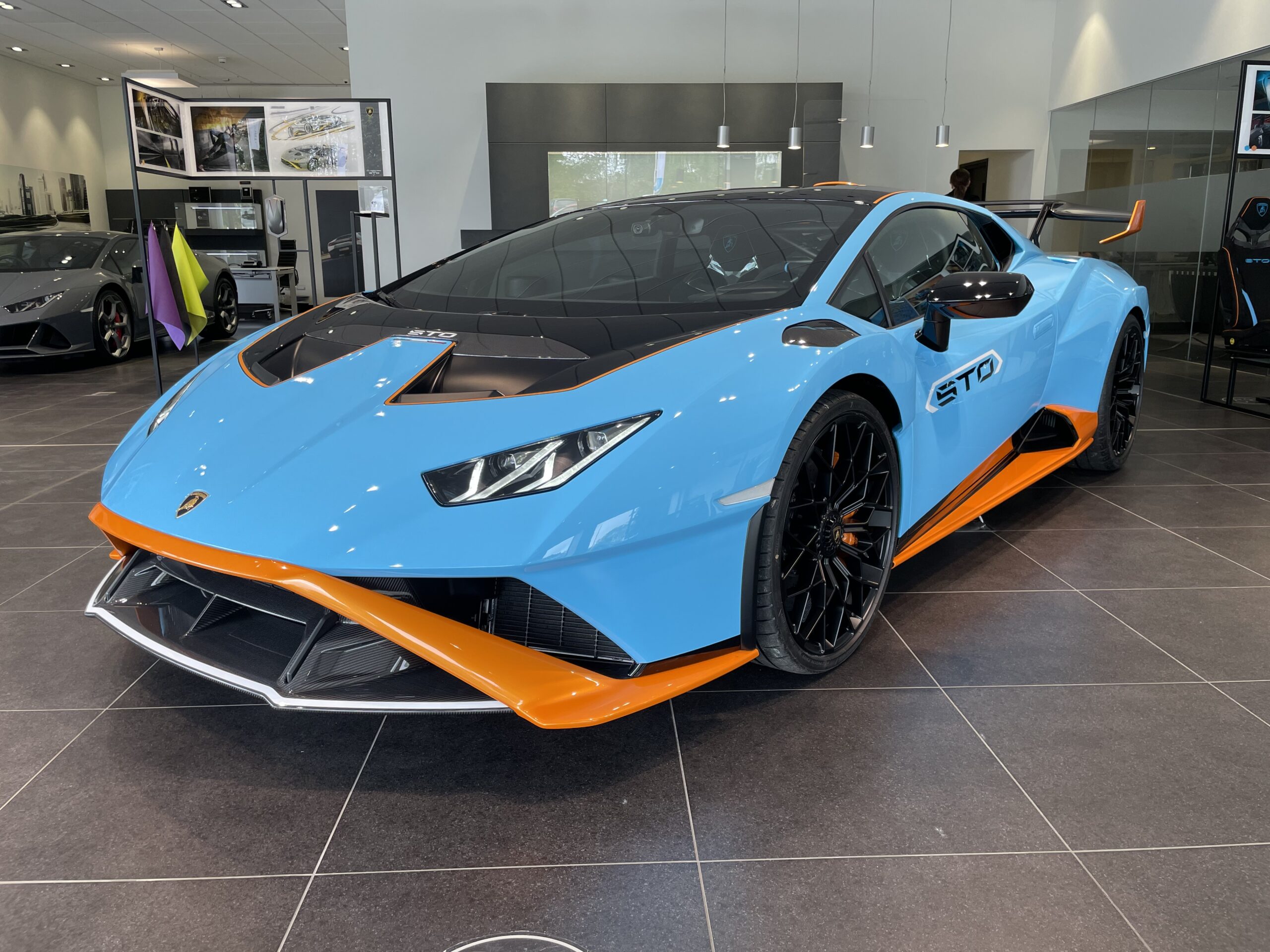 We were very lucky to be given the chance to attend the launch of a very special vehicle at Lamborghini Manchester, the Lamborghini Huracán STO.  A limited-edition, track-orientated version of the highly successful Huracán, basically a road legal version of their Super Trofeo Evo and GT3 race cars, triple Daytona 24 hours winners.

When Lamborghini replaced the highly successful & much loved Gallardo with the Huracán, it was met with a touch of ambivalence; a quick car, did everything right, but arguably a bit clinical & soulless.

Lamborghini listened to the feedback & two years later addressed these issues (and then some), with the Performante model.  A more powerful engine, lighter car with better handling, plus some trick aerodynamics ensured a fast, engaging car.  It proved itself by achieving the Nürburgring lap record at the time.

Continuing development, two years later they launched the Huracán Evo, taking the best of the Performante including the uprated engine.  With the addition of rear steering, new aerodynamics plus an AI powered central control system which brings together the engine, transmission, steering, suspension to give a predictive ‘feed forward’ to the drive.

The Super Trofeo Omologato uses the same engine as the Performante / Evo; a naturally aspirated V10 which generates 631bhp & screams to 8500rpm.  The STO has the upper hand in several important areas.  Firstly it is incredibly light, reducing weight from the heaviest model’s 1542kg to a mere 1339kg, thus giving the best power to weight ratio in the range.  Much of this is achieved by removing the front drive, replacing most of the body parts & interior with carbon fibre panels (including a very cool one piece clam-shell front end instead of wings & bonnet) & magnesium wheels.

Secondly it has significant aerodynamic advantage due to expensive wind tunnel work.  Downforce is increased 53% over even the Performante, creating up to 450kg at 174 mph; in other words it handles like it’s being forced into the road.  Airflow efficiency is upped by 37% thanks to the revised spoilers including the adjustable huge rear wing, roof air scoop and longitudinal rear fin.  The side air intakes also improve cooling, vital for a car that generates so much heat from the engine & brakes.

Finally the suspension is a race set up, with MagneRide 2.0 adjustable damping, which allows the car to be just soft enough to be driven on the road.  It’s wider than the Evo, with a new anti-roll bar & tighter steering ratio turning all four wheels & F1-optimised carbon ceramic brakes. 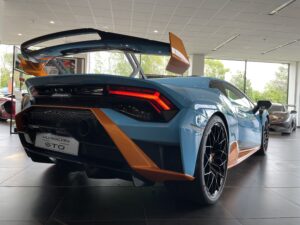 The launch STO that we saw was not available to drive on the road, so I haven’t road-tested it, merely revved it up in the showroom like a big kid.  Being familiar with the Performante & Evo it felt even quicker to rev, even louder, especially the crackle & pop as the revs dropped.  To get the best out of an Evo it needs a track & I suspect even more so the STO.  Both models can reach nearly triple the motorway speed limit & stop in less than half the braking distance quoted in the Highway code.  The cost for all this fun?  Lamborghini press have said ‘from’ £260k but the spec we saw would be closer to £365k.  I have no doubt that it would make a hell of a track day car.

With huge thanks to the team at H.R.Owen & Lamborghini for the viewing & assistance.

Previous
Duo of Hires in Desktop Engineer Team
Next
Taking Away The Pain Points
This website uses cookies to improve your experience.