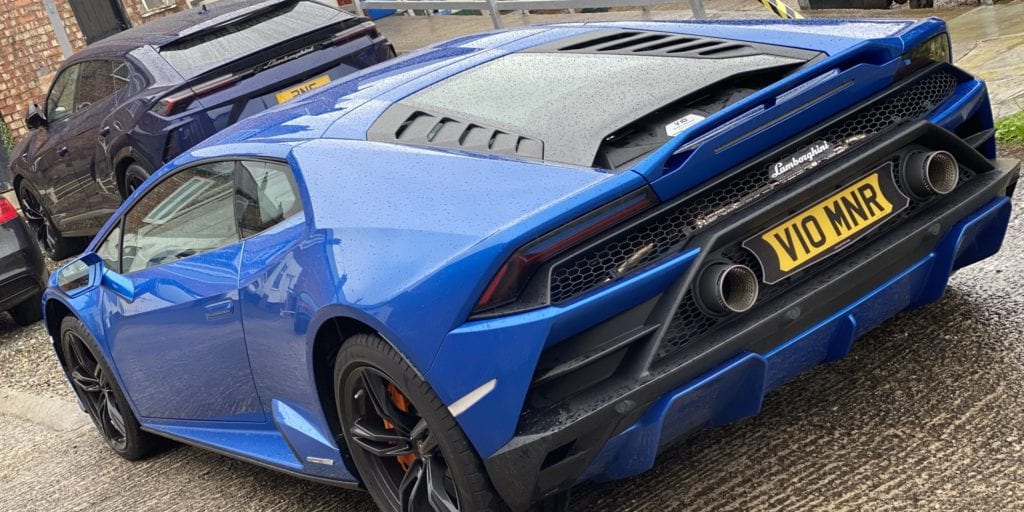 The Gallardo was the first model to emerge from Lamborghini after Audi took control in 1999.  Rumour has it that Audi needed to reduce their 1-10 quality scale to -3 just to encompass the somewhat agricultural build standards.  After being introduced in 2004, the Gallardo was very successful for Lamborghini, trebling world wide sales.

Ten years later, having extracted every inch of life from the Gallardo, it was replaced with the all new Huracán in 2014.  Following the Gallardo’s formula of a V10 petrol engine and four wheel drive, the first ones developed an incredible 610 bhp.

It had a significant redesign last year, with many upgrades based on the track focused Performante, now known as the Huracán Evo.  Using the Performante’s uprated engine, coupled with renewed magnetic suspension including rear steering, revised aerodynamics & some very clever processing software, culminating in a reduced 0-60 sprint down from 3.2 to 2.9 seconds.  The Evo received Lambo’s new infotainment system with an 8.4” widescreen brining Apple & Android connectivity.  One of my favourite touches is an exhaust system now exiting from two large pipes high up on the rear panel.

This year they have brought out a simplified version, the Evo RWD, abandoning the ‘2’ appended to previous models to denote two wheel drive.  RWD stands for rear wheel drive although this is only the start of the story.  On top of losing the front drive train, it also loses the rear steering, carbon brakes (they are an option) and some of the stability trickery, making the vehicle more suited to the purist driver.  33kg lighter, it even gets a unique traction control system allowing torque to be phased out, thus allowing over-steer, great for some drifting fun.

This is a more ‘accessible’ model at £34k less than the 4WD, although with plenty of options & customisable colour schemes, it’ll still end up the wrong side of £200k.

Being familiar with the stunning handling of the four wheel drive Huracán (and it’s Gallado predecessor) where 30 – 50% of the power goes to the front, I was eager to compare this less complex, rear wheel drive version.  As often happens with road tests, the Evo RWD was delivered to me whilst the Wirral was going through some torrential rain.  Firing up the 610bhp engine that sat a couple of feet behind my head and knowing that all that power was going to just the rear wheels, with a traction control system that allowed an extra 30% oversteer, gave me a slight degree of trepidation.

The Huracán has three driving modes thanks to the ANIMA (Adaptive Network Intelligence MAnagement), starting with Strada (road), the wisest for wet roads & ‘normal’ driving.  It’s actually fairly easy to drive in this mode; the gearbox sits in automatic mode, suspension comfortable, whilst the engine & transmission are relatively calm.  It will still really move in this setting, but for quicker driving, I shifted into Sport, after I’d got to grips with the feel of the car.  Switching into this mode, the V10 instantly sounds deeper, with the dual clutch gearbox willing it to move & the engine revving much higher between gear changes.

Corsa (track) mode takes it all to another level, with the traction systems almost non existent. The exhaust becomes fully open and very loud, whilst the stiffer suspension works hard to give incredible grip.  However in this mode, the driver needs to be fully alert as it doesn’t take much to slide the back end, especially in the wet and with an extra sensitive accelerator, it’ll happily light up the rear tyres in a straight line, well beyond UK road speed limits.  This is a mode recommended for experienced drivers or track days.  Or possibly waking up the neighbours.

Sport mode is a good balance between the two, giving a tight, sporty response yet with the comfort of an electronic safety net.  Some degree of drift, coupled to a very powerful & noisy motor makes for some very enjoyable driving.

The dual clutch changes through the seven gears incredibly quickly & smoothly.  The single clutches found in the Gallardo & still in the Aventador can give a mighty mechanical kick between gears.  This is a much smoother gear change & generally very intuitive in automatic.  Large paddles either side of the wheel control the bull in manual mode, and gives much more feel & control than the auto mode.

The interior is built solidly with some lovely touches such as contrasting stitching around the leather.  The somewhat pointless fighter jet start switch adds to the drama.  Everything feels very solid & the infotainment touch screen is fairly intuitive to use.  The only weird thing is the single little indicator switch on the left fork of the steering wheel, a bit like a motorbike’s, possibly an afterthought.

The RWD differs from the four wheel drive Evo more than I’d first expected.  There’s clearly a lot more, or actually less, than just the number of wheels driven that makes up this model.  It strikes me as a bit more of a fun drive than the more serious 4WD & at £34k cheaper it is more accessible.

Both versions are incredibly agile so I guess it depends how you want to get round corners; fast & technical or fun & sliding (with change to buy a BMW 5 series).  Whichever Lamborghini you drive, the sheer sense of drama, of driving something very special, of driving one of only a few hundred examples, the noise & performance, is sure to put a big smile on your face.

Previous
The Secret To Winning Team Awards
Next
Classic Car Favourites
This website uses cookies to improve your experience.