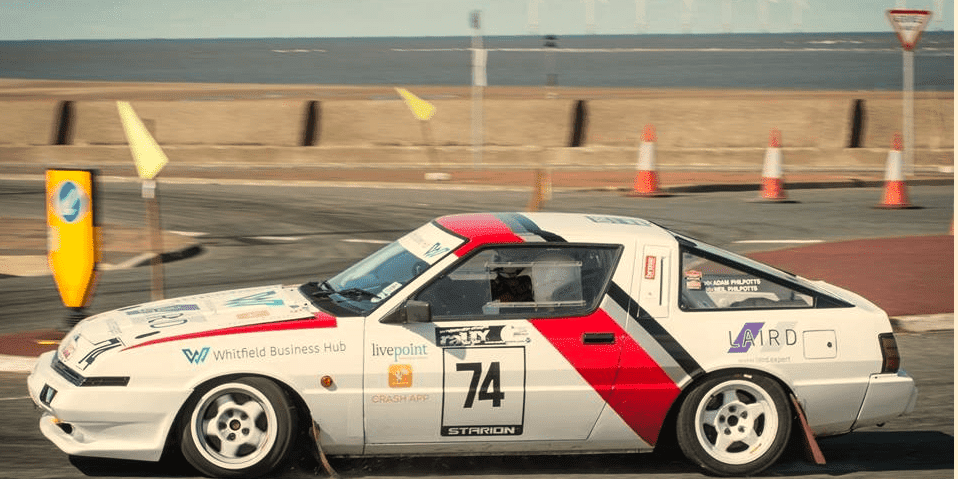 It’s all over for another year. Here’s a round-up from our In-House Engineer Adam on how his race with his Dad went:

Just wanted to say a massive thank you for the support on this year’s New Brighton Promenade Stages Rally! We started off well on the Friday night with two floodlit stages being ran in the dark, getting to grips with the car and reading maps in the dark at high speed which was not easy! We placed a solid 28th out of 100 overall on the Friday night which is somewhat disappointing as the time we had set would have had us in the top 15 the previous year! Just goes to show the level of competition this year!

Day two however didn’t start great with the car developing a problem ticking over when hot causing it to cut out during a hairpin turn on stage three, We lost almost 3 minutes to the rest of the field during this whilst we tried everything to get the car going again, eventually the kind marshals push started us and we were back on the stage! Unfortunately due to losing such a large amount of time to everyone else we where then dead last! The rest of Saturday was just a catch up game trying to finish anywhere other than last! We managed to string a good run of times over the next 7 stages and where back on track to finishing in the top half of the field when stage 9 got cancelled due to car 7 losing their brakes at approximately 80mph and hitting a spectator! Luckily the spectator was ok and did not need to attend hospital but it goes to show how dangerous motorsport is!

We had 3 stages left in the day and where lying 76th overall, we tried harder and harder over the last 3 stages and managed to finish the rally in 48th overall which we were rather proud of taking into account the mornings problems! Ifs and buts come into play in motorsport all the time and unfortunately you can never help but think what if… I worked it out, if we hadn’t lost all that time on the first stage we would have been fighting for a spot in the top 20!

Overall it was a brilliant weekends rallying meeting loads of new people and proudly sporting the Laird & Whitfield flag!

Previous
Laird sponsor Promenade Stages Rally in New Brighton
Next
Is it time to increase the UK’s speed limits?
This website uses cookies to improve your experience.