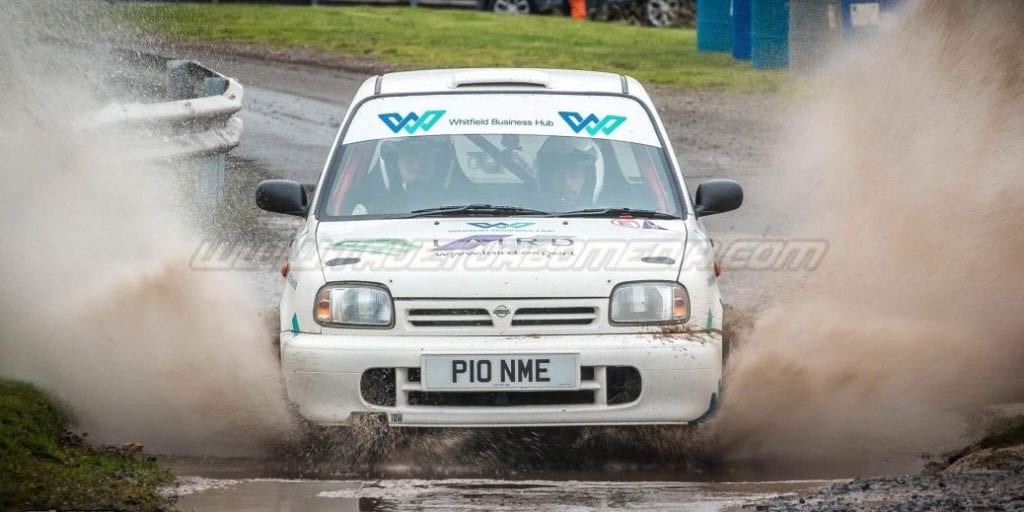 We spoke to our resident rally driver, Adam Philpotts about this year’s challenge. This is what he had to say:

So last weekend was our fourth and final rally of the year, hoping to finish the season well we headed to Oulton Park Race Circuit for the opening round of the Motorsport News Circuit Rally Championship.

The rally is one of the most prestigious rally’s in the single venue rally calendar attracting the biggest names in UK clubman rallying! With a field of approximately 100 cars and a class of approximately 20 we where seeded car 94 for the days rallying.

We where aiming for a top 5 finish in class which would be quite an achievement given the level of competition at this event!

Stage 1 began and we were going well until approximately 3 miles into the first stage, the brakes had faded, the fluid had boiled and the pedal had gone to the floor! This resulted in us colliding with a water barrel in a chicane and damaging the front end, albeit only cosmetically!

We came back to the pits to try to fix the problem the best we could by bleeding the brakes but unfortunately the damage to the pads had already been done and the brakes where not working properly for the rest of the day.

This being said we still managed join 5th in class after the first stage so the aim for top 5 in class was still on!

A few more stages in with the brakes being consistent however not working to the best of their ability, we were lying fifth in class with a fair gap behind us to 6th.

The rally was taking its toll on a few of the competitors, each stage more and more cars where retiring with issues meaning by stage 7 we had climbed to 2nd in class! Unfortunately however we set of for stage 7 with a 30 second lead over 3rd but 15 seconds into the stage one of the HT leads came off the coil pack and resulted in us completing stage 7 on 3 cylinders, the 30 second lead over 2nd soon turned into a 30 second deficit and the aim was now to hold on for the next two stages!

Luckily we managed this task over the next two stages finishing 3rd in class and 47th overall! Some achievement for us given the days challenges and a great way to end the season!