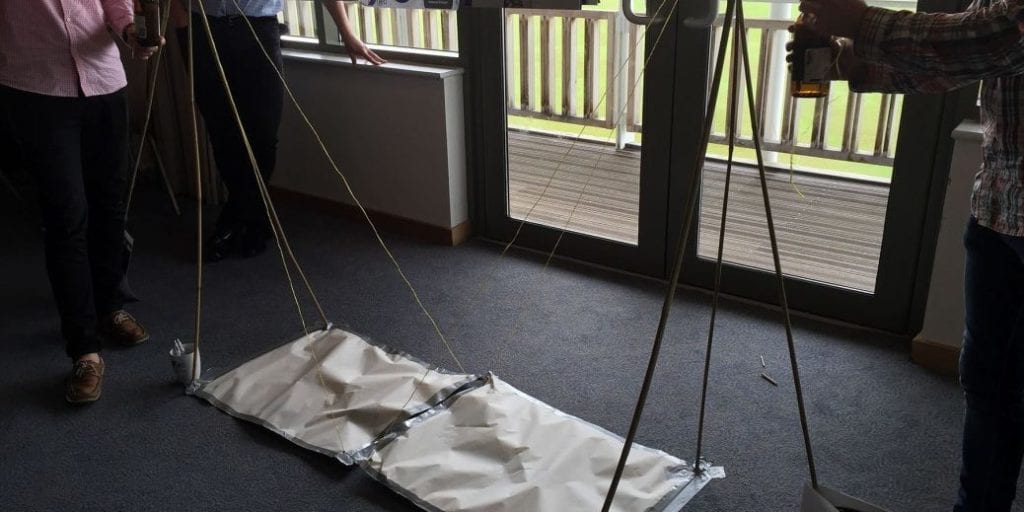 Well I say expand but after being likened to Sepp Blatter I thought it wise to share what I saw.

First things first, the teams were decided using a complex algorithm!! Mix it up, ensure strength and depth within each team, share experience, the list goes on.

When the envelopes were delivered I could already see teams begin to form. Each team quickly established what task lay ahead and planning commenced. Initially I observed a couple divides in design and heard from one team “we’re a team, we need to work together”, minutes later plans were laid..

Questions quickly followed!! The first being “can we sabotage other teams” followed by “Can we buy all the canes”…… At this point it became quite apparent, GAME ON! I have to point out though that later in the task the mind-set quickly changed with teams asking if they could have shared materials, split cost etc.

Budgets were reviewed with teams agreeing their spend and materials required. After being what can only be described as “fleeced” by my first customer who lives down in Cornwall the negotiations began. From smooth negations with the promise of reciprocal work and repeat custom to the ridiculous offers of “I’ll give you £25 for all that mate”

So what have I seen so far. Personalities shone through and you clearly brought all yourselves to work. From the opening of the task, various design, re-design, negotiation within your team and decision of material collaboration was in the air.

Keeping it simple 3 of the teams opted to utilise various chairs and barstools. Others choose a more traditional route with free standing supports.

As the clock was ticking certain constructions were complete but it didn’t stop there. We saw flag poles raised, a variety of branding, use of our existing marketing material and even a paper boat! We even saw the use of empty beer bottles to create a counter balanced system to raise a bridge. All of this a excellent example of teams going over and above the requirement of the task in hand.

TIME UP.. we stood back and admired our final creations which I’m sure Sir Horace Jones (architect behind Tower Bridge) would have been proud of.

All the teams successfully walked through their bridges as per the brief with only one taking a wobble in the process!

Bribes were refused and scores meticulously calculated. The amount of money each team had remaining automatically converted to points ranging from 27 to 48. Points were then awarded for function, ease of the teams walking through, teamwork and the late addition of bonus points for use of branding. I’m glad to say you all scored a perfect 10 for teamwork and that’s a completely honest evaluation.

The task was designed to encourage collaborative working and display the importance of every individual role in achieving and end result. This was key to that task but more importantly key to our roles within Laird.

Thanks again for all your input and participation on the day. Just another reminder of what an amazing team we are.

When we work together, we all win together.

Previous
Our Summer Meetng Round-Up
Next
Poaching our staff – flattered or mad?
This website uses cookies to improve your experience.