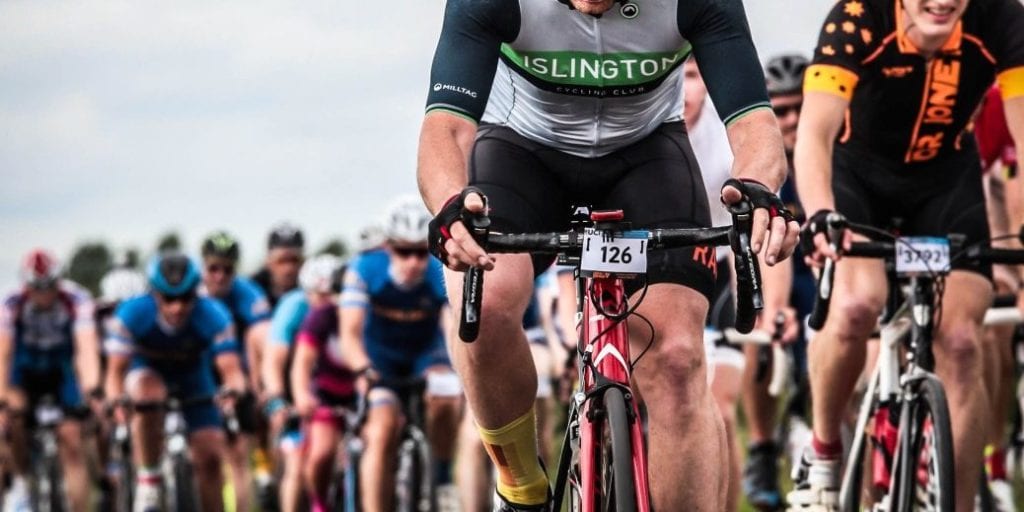 The mainly flat Tour Of Cambridgeshire Gran Fondo, on fully closed roads in Peterborough, has become the biggest event in its third edition with over 8,000 participants. The 79 miles / 127km Race on Sunday 2nd June featured a fast course. This British event has brought the most qualified riders to the World Championships.

John said “My fellow Islington CC club members and I joined the sport wave of riders. The race started very quickly, with the first 80km completed within 2 hours!! The course had 500 meters of climbing with some extremely strong head and crosswinds adding to the level of difficulty and intensity.

Strategically, I kept close to the rider on front with the aim to stay sheltered to save my legs for the final 45km. From previous experience of this course, I had valuable insight into what was required to complete with a decent race time.

With a small climb that was 10km from the end, I was conscious that I would have to keep some diesel in the tank. As I approached the final climb, my legs had well and truly cramped up (my average speed was 38-40kph) and this made it really difficult to stay with the leading bunch of riders. I held position with the lead group after a really big effort on the final climb. I then lost some ground on the front of the bunch but knew I could make it back once the terrain levelled out.

As we approached the top of the hill, I was almost out of the back but struggled on and got back in a better position towards the front of the bunch.

The final 5km was a downhill fast finish topping out at 55kph on the flat sections. At this stage, I was in the leading group and even put my nose into the wind pulling everyone along, such a great feeling when you have 100 riders behind you. The thoughts of finishing the race with a good recorded time was starting to become a reality and this helped to silence the pain in my legs temporarily!

The final sprint was interrupted as an earlier crash on the finishing straight blocked the chances of a proper sprint finish. It didn’t matter though; my time was good enough to qualify for the UCI Gran Fondo Amateur World Championships.

The quickest time of the day was 3hr2mins and mine was 3hr17mins. Pretty chuffed!”

John is now looking for sponsorship for the World Championship, so expect to see our Laird logos on a yellow jumper soon…