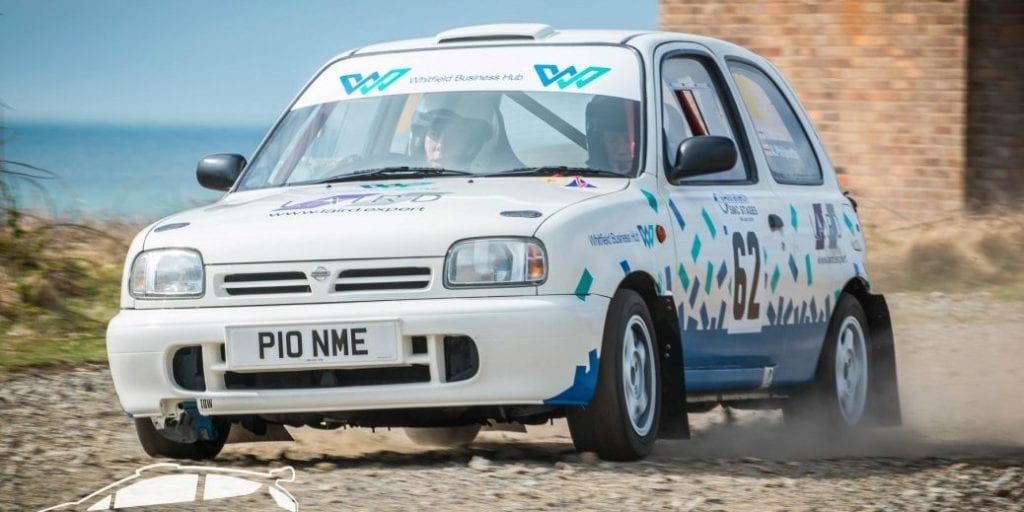 We spoke to our motor engineer, Adam Philpotts, about his first outing in a Laird sponsored Nissan Micra in this year’s SMC Rally Stage in Anglesey

Back in September 2017 I purchased a Nissan Micra that had been used as a Targa rally car. Targa rallying is an entry level form of rallying that only requires minimal modification and safety equipment, however as I planned on using the vehicle as a Stage Rally car competing in National events the vehicle had to be built to spec. It took me around 6 months to build and very little of the original car is still here most of it has been changed for upgraded parts. The vehicle was now fully converted into an MSA Log Booked Rally Car.

The day of the rally came, it was my first stage rally and was held Anglesey Circuit. The Event was organised by Stockport Motor Club and was called the Altratech SMC Stages.

As I do not hold a trailer licence I resorted to driving the car from the Wirral to Anglesey some 80 miles each way, this is relatively unheard of in motorsport today and was met by shock of other competitors when the seen the vehicle driving down the A55 and through the gates at the track.

Once I had arrived at the track it was time to sign on and take the car through scrutineering. Scrutineering is where the vehicle is checked over to ensure that all the safety equipment is up to date and meets the correct standards, as the vehicle had just been built we got through this part without any hiccups so now came the anxious wait for the rally to start.

As we had a starting number of 62 we were the second to last car to enter the stage, however this didn’t stop the nerves from flowing, sitting on the start line the heart was racing and the legs where shaking, but as soon as the green light came on these quickly subsided.

Stage 1 was a steep learning curve, I drove what I thought was quick and thought I would have set a good time, however upon returning to the pits the results showed that I had been beaten by my nearest competitor (car 61 Nissan Micra) by some 15 seconds, not a great start.

This lead to us pushing harder on the second stage which was a re run of stage 1, the increased pace and risks had our stage time within 1 second of the time set by car 61.

With 8 stages left to run on the rally we had a bit of an uphill battle on our hands to try and reduce the lead, we pushed harder over the next few stages and got the gap down to 3 seconds overall, with time running out on the day and the track having noise curfew of 6pm it was evident that all 10 stages set to run where not going to be run and some would be cancelled at the end of the day. We therefore needed to push as hard as possible and get the job done.

We pushed over the next few stages and manged to get past the other Micra taking a lead of around 4 seconds, now we needed to stay here so the push continued!

That was the rally complete, we had a fantastic first rally made better by an enjoyable battle with car 61, we managed to finish 5th in class and 44th overall, the car performed faultlessly all day and even got me home without issues.

All in all it was a fantastic day and a great result!