My Dad had one of those…

A line that most adults of certain age, with even a passing interest in things automotive, will have uttered at some point in the last 20 years (or more) when talking about cars of a certain age. Or perhaps they wished that their dad (or indeed mum, or older sibling etc.) had owned one. Or perhaps as in my case, as a child of the late 70s and 80s, my dad had one, but not quite the one. I talk of the Audi Quattro.

It’s a car that needs little introduction or in-depth description, even to those who aren’t car fanatics, certainly (I hope) to anyone over the age of 30 anyway. For a time (well for most of the 1980s actually) the car, as most people remember it, was everywhere. It was a time when rallying enjoyed a Prime Time TV slot (when there were only 4 channels to choose from), and the Quattro could regularly be seen (and of course heard) being expertly thrashed around circuits across the world by the likes of Hannu Mikkola, Stig Blomqvist and Michelle Mouton. 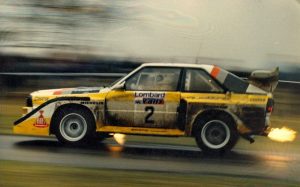 It could also of course be found slinking down the Kings Road in Chelsea at a slightly lesser pace, at the hands of somewhat less talented drivers who only needed one hand on the steering wheel – the other would invariably have been holding the ‘car phone’ (remember them?) whilst closing that huge deal or keeping track of the stock market. The car was my poster- boy. Pictures of it adorned my bedroom wall for years. Always bright red (Tornado Red if we’re being right and proper), with the gradually fading four-rings adorning the front doors. I adored it. I wanted one, even though I was far too young to drive. I wanted my dad to get one. He wanted one. All of my friends wanted one. In fact, I’m pretty sure everybody wanted one. My dad already had a 1983 silver Audi Coupe, complete with ‘5E’ badge on the front grille and ‘fuel injection’ badge on the boot (when that was a thing). Surely, the logical next step was the real deal?

Well….yes and no. It would seem that by the time summer 1985 rolled around, my dad wanted 5 door practicality. And perhaps also couldn’t stretch to the hefty price tag of the wide-winged, ‘full fat’ car.

So with that, in June of the aforementioned year, along came B575 WDB, a gleaming white Audi 90 Quattro. Yes….an Audi 90…….resplendent with fading 4 rings on the front doors and ‘Audi Sport’ go faster stripes running the length of each side. Gone was the ‘5E’ badge from the front grille and ‘fuel injection’ badge from rear, both now replaced with that ubiquitous ‘quattro’ badge (note the lower case q) in that typeface…..the same used by Audi to this very day. 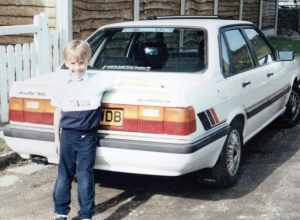 A younger Jonathan and the Audi 90 Quattro

To an impressionable 9 year-old, those things on their own meant the car was fast. Add in a squidgy rubber rear spoiler, twin exhausts, the unmistakable 5-cylinder soundtrack, an interior with gauges and dials, a special switch which my dad told me was for using when it snowed, and yet another ‘quattro’ emblem forming part of heated rear window element (which de-misted before the rest of the rear window), and for the next 3 years at least, my dad had the best car in the world……

These days of course, it’s the original, wide-winged, Group-B Rally based, TV show-starring ‘UR’ Quattro that adorned my bedroom wall in the 80s which everybody remembers, and indeed that which demands and achieves astronomical values for completely original, low mileage examples. It’s still the car that now, as a grown up of a certain age, with children older than I was in 1985, that I lust over and would buy if a lottery win came my way. And let’s not get started on the short and stumpy ‘Sport’ Quattro…… But….don’t forget the leftfield, often overlooked, perhaps more accessible cars……the lesser-known working-class heroes that let us don the rose-tinted shades and journey back to simpler times.

These two spotted in Classic Car Auctions Online Sale are pretty much the same car, opposite ends of the price spectrum representing a good illustration of how many factors go to make up the value of a classic car, & a valuable lesson in ensuring an inspection prior to buying.  And of course, they’re both my favourite car of all time and the car that I would give my right arm to own. I’d have been happy with the knackered barn find if I had £17k going spare! 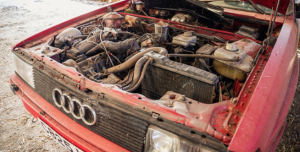