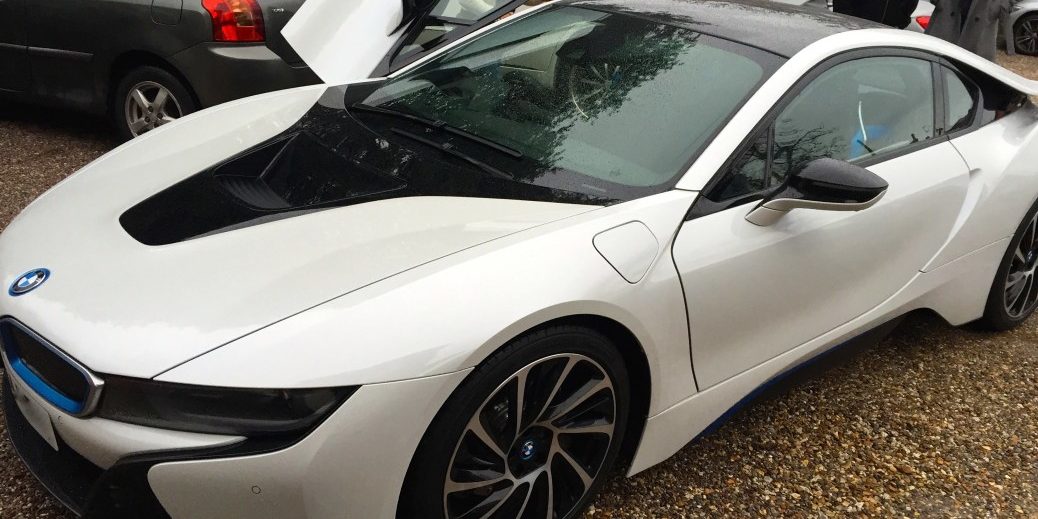 Nik Ellis tests the BMW i8

I first encountered the i8 in concept form back in 2011 at the Los Angeles Motor Show.  It was not long after BMW had developed it further from the original Concept Vision EfficientDynamics car (not the most catchy of names!)   I recall being drawn to the futuristic design, the left-field thinking that had led to those rear quarter wing things, the drama of the scissor doors.

Some four years later the production model first set foot in the UK and had managed to retain a lot of the original styling; in my opinion one of the best looking vehicles to grace our roads.  Some of the first hybrids were pretty uninspiring cars, mainly Japanese blancmanges like the Prius, Leaf & Insight, so the i8 was the first sexy one.  Nowadays most manufactures have hybrid versions of their models accounting for more than 1 in 5 vehicles worldwide.

The i8 has a small 1.5 litre three cylinder petrol engine in the back driving the rear wheels and an electric motor in the front axle driving the front wheel.  It can drive in a fully electric mode, a combination of both or just petrol.  It effortlessly jumps between modes depending on your style of driving, so pooling around in traffic engages the electric motor and almost silent movement.  At greater speeds the petrol engine transitions into petrol and then for full acceleration the motor augments the engine for full power from all four wheels.  In petrol mode the battery gets recharged and to a lesser extent energy is recovered during breaking.

The engine pumps out 228bhp whilst the motor generates 129bhp resulting in a 0-62mph acceleration time of 4.4 seconds.  Not a bad time, but not mind blowing; I think because it looks fast I expected it to feel faster.

The handling is fairly good if a little dull.  Again I think I expected it to be more dynamic for vehicle made of a carbon fibre with four wheel drive.  I managed to flatten the battery in less than 20 miles, so if economy & environment are top of your priorities, probably not the most ideal choice.

The scissor doors and high sill of the carbon tub takes a bit of practice to enter gracefully.  I’m glad I don’t wear short skirts.  Once inside however the interior is beautiful, albeit fairly typical BMW styling & layout.  OK not wildly different to a 3 series but that’s no bad thing as the BMW family brings some incredible tech with it.  For example I love the ConnectedDrive app which allows pre-heating of the interior, setting the satnav from the comfort of home (as opposed to left handed typing in car)

I actually really like this car.  Would I pay £120-odd thousand?  Probably not but with second hand ones starting around £40k perhaps.  Difficult to come up with rivals; perhaps the Tesla Model S, although that’s fully electric, much faster but with boring looks and a big price tag.  Possibly a 911, Audi R8 or the Lexus LC500h; all more traditional vehicles.

The shape from every angle is incredible, whilst the tech is typical BMW brilliance.  I just wanted a touch more sportiness to match the looks. So yes I really liked the i8 but only 90%.

Reproduced with the kind permission of Wirral Life Magazine